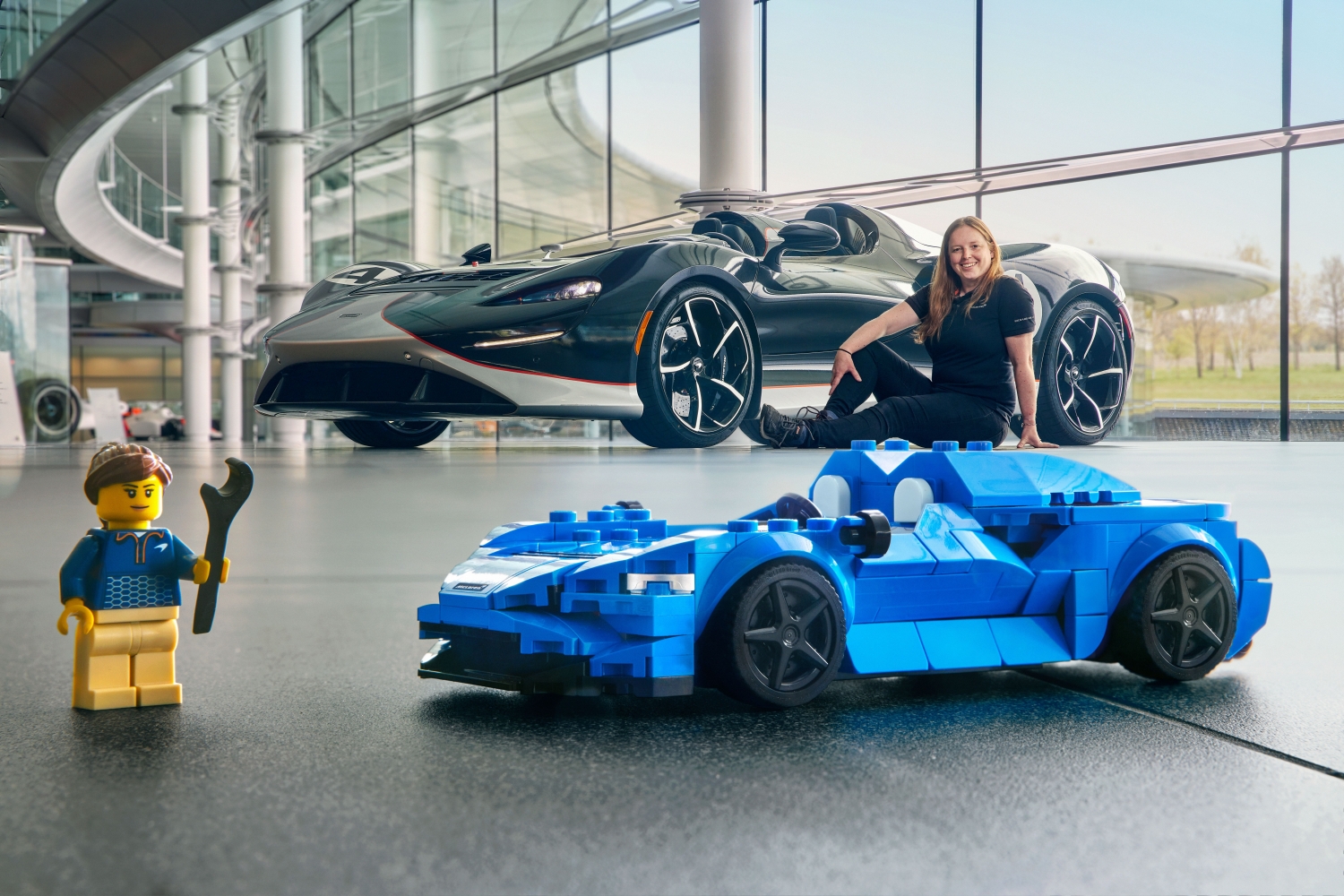 Pulling into the LEGO® McLaren garage today is the newest collaboration between the luxury supercar maker and iconic play company: the LEGO Speed Champions McLaren Elva.

Inspired by the lightest and most innovative McLaren supercar yet, this thrilling new set gives children and car enthusiasts alike the chance to collect, build and explore one of the world’s most exclusive open top speedsters.

Designed for unparalleled driver engagement and ultimate driving enjoyment, the McLaren Elva has no roof, windscreen or windows, making for an unforgettable driving experience. The McLaren Elva’s Active Air Management System (AAMS), uses clever aerodynamics to control the air, creating a ‘bubble’ around the occupants and sheltering them from the oncoming wind.

Just like the real thing, the 263-piece LEGO set comes with a wide chassis, incorporating the two-seat open cockpit, and authentic detailing including the AAMS vents that make the Elva so innovative and unique.

The LEGO Speed Champions McLaren Elva measures over 1.5in. high, 6in. long and 3in. wide. Stunning from every angle, the detailed replica delivers an exciting building experience, perfect for display or super-aerodynamic driving action.

Rachel has worked on incredible vehicle projects like the McLaren Senna GTR, and also supported the design and creation of the LEGO Technic™ McLaren Senna GTR released in January this year.

Her role follows McLaren Ultimate Series models, including the Elva, all the way from concept to production and managing elements such as track and aerodynamic wind tunnel testing.

“It is amazing to have witnessed the Elva go from a boundary pushing concept drawing all the way to final vehicle production. It feels even more special now to see all of that hard work transformed into the LEGO Speed Champions Elva model for us to share with children and fans across the world.

“Ever since I was a child I have dreamed of driving and testing cars and I still can’t believe that it’s a part of my job. I hope that it inspires other young people to follow their passions and pursue careers in the automotive or design and engineering industries. There are so many incredible opportunities.’’

Fans aged seven and above can explore the makeup of the real-life Elva as they build, before showing it off or putting it to the test against other toy cars from the Speed Champions range – including the McLaren Senna.

“As a forward-thinking luxury brand, it is important to us at McLaren Automotive that who we work with reflects and echoes our passion for innovation and technology and also the value that we place around inspiring future generations through great design. This is why the collaboration between McLaren and the LEGO Group is such a natural fit, with both brands using creativity and learning to inspire and develop the builders and engineers of tomorrow.”
Gareth Dunsmore, Chief Marketing Officer, McLaren Automotive

“With LEGO Speed Champions, we hope to bring LEGO fans of all ages closer to the car of their dreams and encourage them to believe they can be whatever they want to be, just like Rachel has. That’s why it’s been such a privilege to work with McLaren to create a LEGO version of the Elva. We worked closely with the McLaren team from conception of the idea when the real Elva was still in early development, all the way through the design process.

“As the first Speedster in the LEGO Speed Champions collection, we worked closely with the McLaren team, receiving initial sketches and early digital renders of the car, that helped us create a completely unique building experience.”
Chris Stamp, Design Manager, LEGO Speed Champions

United by a shared ethos of engineering excellence and pioneering design, McLaren Automotive and the LEGO Group have a history of collaborations including iconic supercars such as the McLaren P1™, the 720S, McLaren Senna and the McLaren Senna GTR.

The new LEGO® Speed Champions McLaren Elva will be available from June 2021 from LEGO.com, LEGO stores and other retailers globally with an RRP of $19.99.

At McLaren North Jersey, our select automotive professionals consider it a top priority to impeccably bring together the thrill of driving a high-performing McLaren with the unsurpassed reputation of delivering first-rate service to each client in Ramsey. This commitment equates to you always receiving prompt assistance from the moment you walk through our doors and convenient access to the latest selection of premium sports cars on the market.

Whether you live in a beautiful home on the coast, enjoy the views of a pristine golf course from your luxurious living room, or find yourself cruising and strolling along Park Ave – we have the McLaren that will fulfill your dreams. McLaren has much more to offer than just speed and thrill; McLaren in Orlando means there is a new bar for luxury customer care and exceptional cars.

Ready for an upgrade? Explore our selection of new and pre-owned McLaren vehicles for sale!